The Federal Reserve chose to leave short term interest rates in the United States unchanged at the conclusion of its fourth two-day meeting of 2019 on 19 June 2019, holding its target range for the Federal Funds Rate between 2.25% and 2.50% for at least another six weeks, when the Fed will meet again to consider cutting the Federal Funds Rate.

According to the CME Group's FedWatch Tool, investors are betting the Fed will cut its Federal Funds Rate by a quarter point, giving a 100% probability of that happening at the next meeting. Following the Fed's June meeting, investors are now also betting the Fed will cut rates by another quarter point at the conclusion of its 18 September 2019 meeting, and again at the conclusion of its 11 December 2019 meeting, putting three rate cuts on tap for the remainder of 2019.

They are also giving a little higher than even-money odds that the Fed will cut rates again in March 2020, which would put the forward-looking focus of investors on that distant future quarter.

As for the odds of recession, there is now a one-in-eleven chance the U.S. economy will enter into a recession sometime between 19 June 2019 and 19 June 2020 (or really, before July 2020). The latest update to the Recession Probability Track shows these odds at roughly a 9% probability. 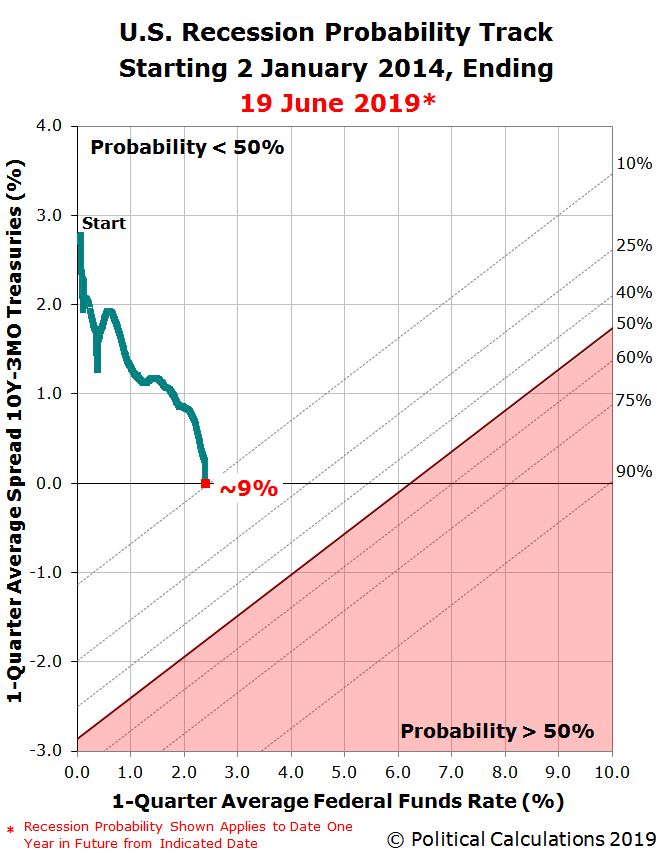 The Recession Probability Track is based on Jonathan Wright's 2006 paper describing a recession forecasting method using the level of the effective Federal Funds Rate and the spread between the yields of the 10-Year and 3-Month Constant Maturity U.S. Treasuries.

If you would like to run your own recession probability scenarios, please take advantage of our recession odds reckoning tool, which like our Recession Probability Track chart is based on Jonathan Wright's paper.

It's really easy. Plug in the most recent data available, or the data that would apply for a future scenario that you would like to consider, and compare the result you get in our tool with what we've shown in the most recent chart we've presented. We do just that, in fact, when we account the Fed's recent quantitative tightening monetary policies in our in-between Fed meeting updates, which would put the odds of an official period of recession starting before July 2020 much higher than what the "official" Wright methodology indicates.