We're a little over the halfway point between the Federal Open Market Committee's scheduled meetings, where the Federal Reserve's interest rate-setting body will announce a quarter point rate cut in the Federal Funds Rate at the conclusion of its next two-day meeting on 31 July 2019, its first reduction since December 2008 when it dropped to near-zero.

According to the probabilities indicated by the CME Group's FedWatch Tool, that reduction will be the first of three rate cuts in 2019, which if all are implemented as currently expected, will lower the target range for the interest rate the Fed charges banks to borrow money overnight from today's level of 2.25-2.50% to 1.50-1.75% by the end of 2019.

Using a model developed by Jonathan Wright back in 2006, at today's levels, the Federal Funds Rate combined with the ongoing inversion of the 10-Year and 3-Month U.S. Treasuries indicate a nearly 1-in-10 chance that the National Bureau of Economic Research will someday determine that a national recession began in the United States sometime between 12 July 2019 and 12 July 2020. The Recession Probability Track shows those odds as a 10% probability, which has occurred because of the sustained inversion of the U.S. Treasury yield curve since 23 May 2019. 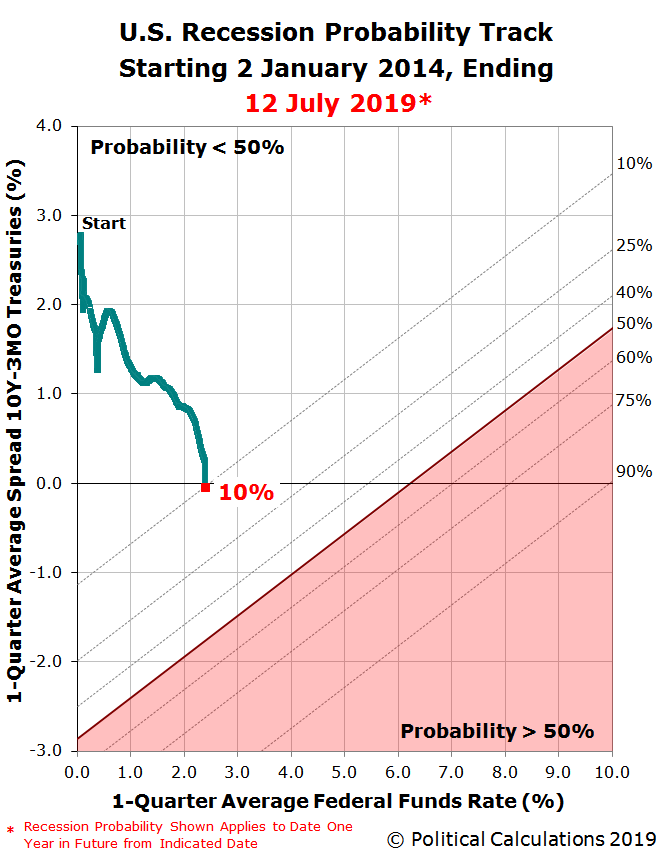 The Recession Probability Track is based on Jonathan Wright's 2006 paper describing a recession forecasting method using the level of the effective Federal Funds Rate and the spread between the yields of the 10-Year and 3-Month Constant Maturity U.S. Treasuries.

Because Wright's model was developed using historic data prior to when the Fed adopted its unconventional monetary policy of quantitative easing as the Federal Funds Rate was held at near-zero levels, it doesn't take into account the effects of the reverse of that policy, quantitative tightening, which has been ongoing since May 2014, and which the Fed plans to continue into September 2019.

Measured as the "shadow Federal Funds Rate", several analysts have indicated they believe quantitative tightening would add at least three full percentage points to the nominal Federal Funds Rate if it were incorporated in that interest rate, raising it to an adjusted level of about 5.4%.

When we substitute that adjusted Federal Funds Rate into our recession odds reckoning tool, which like our Recession Probability Track chart is based on Jonathan Wright's paper, we find the adjusted probability of recession starting between 12 July 2019 and 12 July 2020 is 40%, or rather, a chance of 1-in-2.5.

If you have a particular recession risk scenario you would like to consider, please take advantage of our recession odds reckoning tool. It's really easy, and if it helps, the average yields of the 10-Year and 3-Month Treasuries over the last 90 calendar days ending on 12 July 2019 are 2.28% and 2.32% respectively, while the average effective Federal Funds Rate over the same period is 2.40%.