That cut comes as the odds of a national recession starting in the U.S. sometime during the next twelve months as might be determined at a later date by the National Bureau of Economic Research has reached its highest level since the Fed first began hiking interest rates in 2016, with just over a 10% probability according to the methodology laid out by the Federal Reserve Board's Jonathan Wright in a 2006 paper. This quarter point reduction was expected by many analysts to be the first of a series of quarter point cuts that would take place over the next several quarters, which the Fed Chair's comments at the press conference following the announcement put into doubt, with stock prices dropping within minutes as investors absorbed the unexpected news. The S&P 500 went on to close more than 1% down on the day. 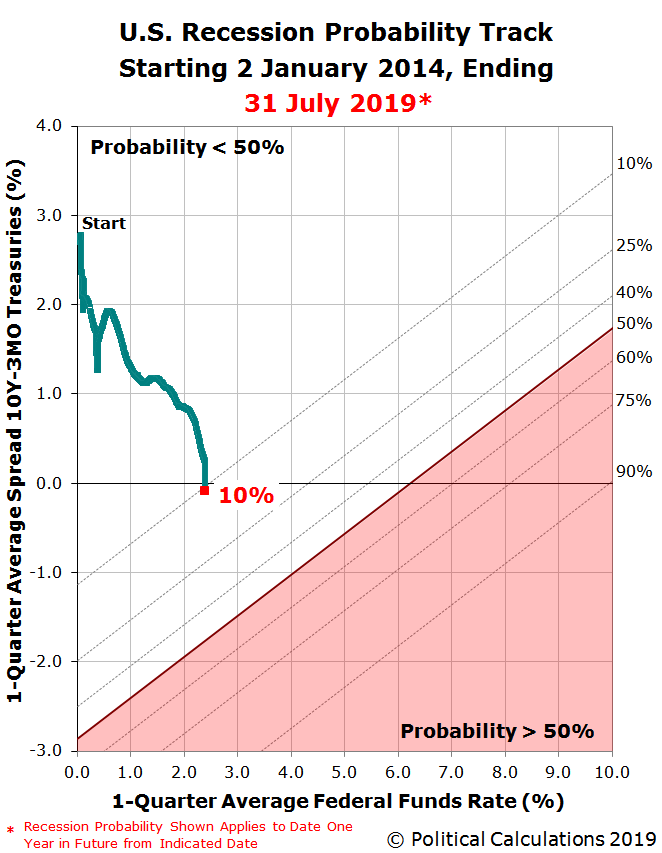 Going into the FOMC's July 2019 meeting, we were seeing some evidence that the rate at which the recession probability has been increasing is beginning to slow. The spread between the 3-Month and 10-Year Treasuries in the U.S. Treasury yield curve has gone from being mildly inverted to mostly flat in recent weeks, while the Fed's action to reduce its Federal Funds Rate should contribute to lowering the recession odds forecast by this model in upcoming weeks, although the Fed's deviation from market expectations may now lead to the yield curve becoming more inverted, which would counteract that effect.

The Recession Probability Track is based on Jonathan Wright's recession forecasting method using the level of the effective Federal Funds Rate and the spread between the yields of the 10-Year and 3-Month Constant Maturity U.S. Treasuries. If you would like to run your own recession probability scenarios, please take advantage of our recession odds reckoning tool.

It's really easy. Plug in the most recent data available, or the data that would apply for a future scenario that you would like to consider, and compare the result you get in our tool with what we've shown in the most recent chart we've presented. We do just that, in fact, when we account the Fed's recent quantitative tightening monetary policies in our in-between Fed meeting updates, which would put the odds of an official period of recession starting before August 2020 above the 40% mark.