Political Calculations
Unexpectedly Intriguing!
22 August 2019
What The Dickens Is Going On With Recession Indicators?

A quote from Charles Dickens' A Tale of Two Cities seems an appropriate introduction:

Let's start with an update to the Recession Probability Track, which is based on Jonathan Wright's 2006 paper describing a recession forecasting method using the level of the effective Federal Funds Rate and the spread between the yields of the 10-Year and 3-Month Constant Maturity U.S. Treasuries, where we will see the early effects of both the Fed's quarter point rate cut that was announced on 31 July 2019 and the recent inversions of the U.S. Treasury yield curve, which has seen long term rates fall below short term rates. 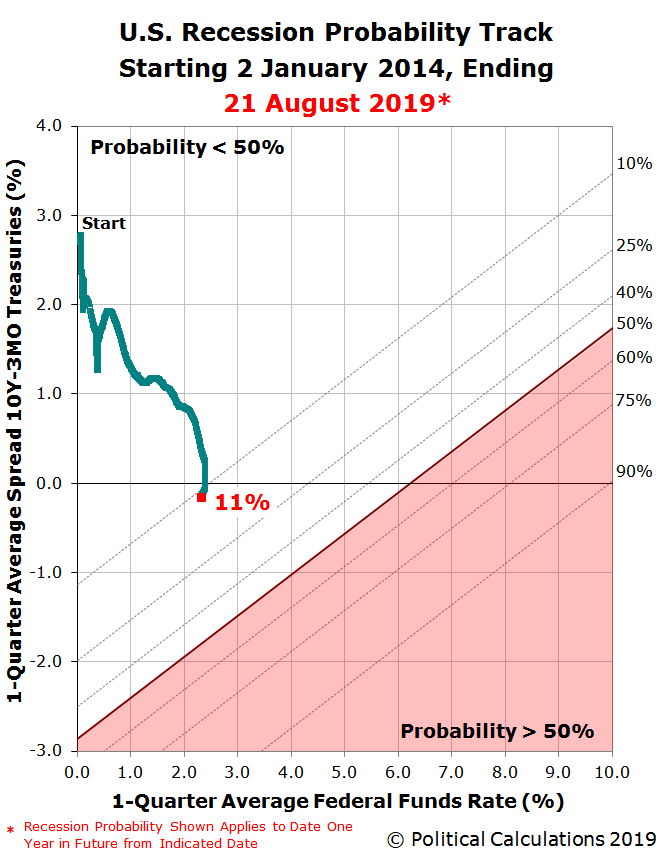 Using Wright's recession forecast model, with an average Federal Funds Rate of 2.33%, an average 10-Year constant maturity Treasury yield of 2.01%, and an average 3-Month constant maturity Treasury yield of 2.16% over the last 91 days, we find the probability that a recession will eventually be found to have begun between 21 August 2019 and 21 August 2020 is 11%, or rather, a 1-in-9 chance of a recession starting before September 2020.

That's the 'best of times' outcome, which would appear to be backed by the sunny outlook indicated by Credit Suisse's latest update to its U.S. recession dashboard: 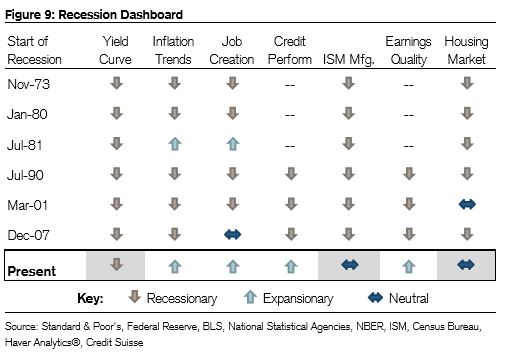 Economic data looks nothing like that of a recession, according to Credit Suisse.

The firm created a “recession dashboard” in which the firm tracked the state of seven main economic indicators at the start of each recession dating back to 1973. In past recessions, most of the indicators were “recessionary” or “neutral,” while the current state of the economy is telling a different story.

But there's potentially a problem here for assessing the probability of a future recession in today's economic environment. Because Wright's model was developed using historic data from before the Great Recession, it doesn't consider factors like quantitative easing or quantitative tightening in its assessment, which can achieve effects similar to what would happen if the Fed either hiked or cut U.S. interest rates, without changing the level of the Federal Funds Rate itself.

When the Fed implemented its various quantitative easing monetary policies from 2009 through 2015, this effect was measured as the "shadow Federal Funds Rate", which became the primary means by which the Fed sought to stimulate the U.S. economy after it cut the Federal Funds Rate all the way to a near-zero level. By May 2014, these policies delivered the equivalent of an additional three percentage point reduction in the Federal Funds Rate while it was nominally held between 0% and 0.25%.

After that, the Fed hiked the Federal Funds Rate several times before the rate officially rose to its target range between 2.25% and 2.50%, which lasted until 31 July 2019.

But that wasn't the Fed's only method of conducting its quantitative tightening policies. In late 2017, the Fed began actively reducing its holdings of debt securities issued by U.S. government entities, where some analysts estimate that each $200 billion reduction in the Fed's balance sheet has the equivalent effect of a 0.25% hike in the Federal Funds Rate. Collectively, the Fed's balance sheet reduction quantitative tightening program from September 2017 through July 2019 would have the equivalent effect of increasing the effective level of the Federal Funds Rate by an additional 0.8%.

The following interactive chart shows how these analysts perceive the effect of the Fed's quantitative tightening programs to the U.S. economy has played out since they began in May 2014, as if the Fed had only raised the Federal Funds Rate from its near-zero level at that time. If you're reading this article on a site that republishes our RSS news feed, please click here to access a static version of the chart.

When we substitute the peak QT-adjusted Federal Funds Rate of 6.2% from July 2019 into our recession odds reckoning tool, using the same average 10-Year and 3-Month U.S. Treasury yields we used in the update to the Recession Probability Track above, we find the adjusted probability of recession starting in the U.S. sometime in the next 12 months is 54.5%, or rather, or slightly better than even.

Whether that's the correct way to account for what what the Fed does in the shadows through its quantitative tightening policies remains to be determined, but the extent to which the Fed's policies have an effect on the economy does explain why investors are betting the Fed will be forced to engage in a series of cuts to the Federal Funds Rate and to also restart its quantitative easing programs to mitigate the effects of a new recession to which its policies are believed to have contributed.

That was an interesting alternative scenario to consider for forecasting the probability of recession in the U.S. during the next 12 months. If you have a particular recession risk scenario you would like to consider, please take advantage of our recession odds reckoning tool.

Meanwhile, if you would like to catch up on any of the analysis we've previously presented, here are all the links going back to when we restarted this series back in June 2017.