That cut comes as the odds of a national recession starting in the U.S. sometime during the next twelve months, as might be determined at a later date by the National Bureau of Economic Research, has continued to drift higher even as the Fed has begun cutting interest rates, with just over a 11% probability according to the methodology laid out by the Federal Reserve Board's Jonathan Wright in a 2006 paper. This quarter point reduction was the second quarter point cut following the cut announced on 31 July 2019 at the conclusion of the Federal Open Market Committee's previous meeting.

Stock prices quickly dropped by nearly one percent from the previous day's closing value shortly after the announcement, as investors were looking for signs the Fed would start implementing quantitative easing in addition to the rate cut. That disappointment didn't last long, because Fed Chair Jerome Powell's comments during the following press conference hinted the Fed would be likely to start new rounds of quantitative easing in the near future when he said that "it is certainly possible that we'll need to resume the organic growth of the balance sheet sooner than we thought."

That prospect sent bank stocks up sharply and led the S&P 500 (Index: SPX) to close slightly higher for the day. The question now is whether quantitative easing will become a virtually permanent feature of the Fed's open market operations.

Updating the Recession Probability Track, we find that the rate at which the probability of recession is rising using Wright's methods is indeed beginning to slow, with just over a one-in-nine chance of a recession beginning in the U.S. before October 2020. 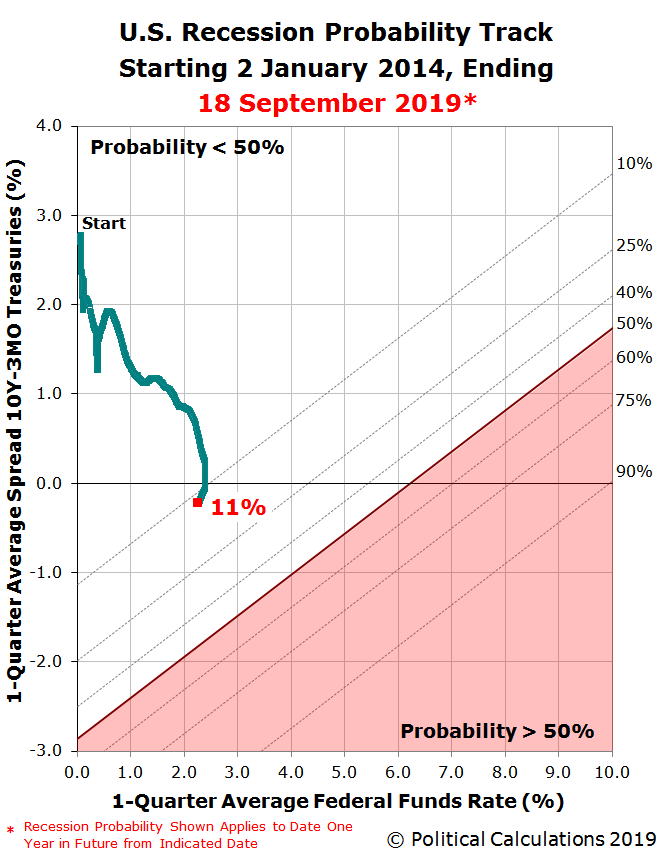 The Recession Probability Track is based on Jonathan Wright's recession forecasting method using the level of the effective Federal Funds Rate and the spread between the yields of the 10-Year and 3-Month Constant Maturity U.S. Treasuries. If you would like to run your own recession probability scenarios, as we recently did after factoring in all the quantitative tightening the Fed achieved prior to its policy reversal in July 2019, please take advantage of our recession odds reckoning tool.

It's really easy. Plug in the most recent data available, or the data that would apply for a future scenario that you would like to consider, and compare the result you get in our tool with what we've shown in the most recent chart we've presented above.