Political Calculations
Unexpectedly Intriguing!
October 31, 2019
After Peaking at 1-in-9 in September 2019, Odds of U.S. Recession Falls to 1-in-11

Thanks largely to the effects of the Federal Reserve's actions to reduce short term interest rates, the Recession Probability Track now visually confirms the probability the U.S. economy will enter into a national recession peaked at 11.3% on 9 September 2019 and has indeed begun to recede. What that means is that should the National Bureau of Economic Research someday determine a recession began in the U.S. in either 2019 or 2020, the odds are highest that it will identify a month in the period from September 2019 through September 2020 as Month Zero for such a recession, or rather, the last month in which the U.S. economy's business cycle expanded before entering into a sustained period of contraction. Much like December 2007 marks the final month of economic expansion before the onset of the Great Recession.

Though the Fed took action again on 30 October 2019 to cut the Federal Funds Rate by another quarter point for the third time since 30 July 2019, the receding recession odds indicated by the Recession Probability Track is mainly responding to the Fed's previous two quarter point interest rate reductions, although the end of the inversion between the 10-Year and 3-Month constant maturity U.S. Treasuries is also contributing to the reduction in forecast recession risk. 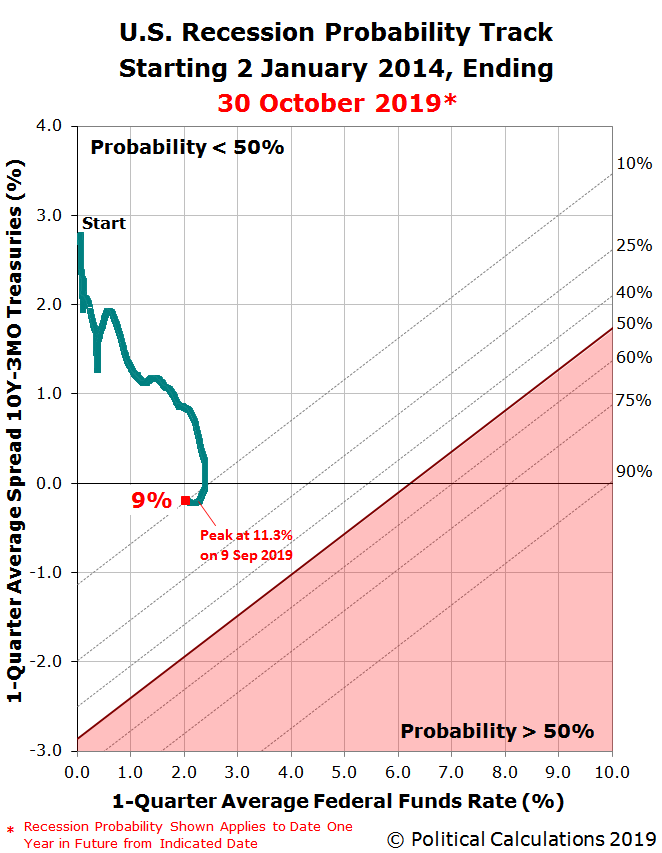 The Recession Probability Track is based on the recession forecasting method introduced by Jonathan Wright in his 2006 paper, The Yield Curve and Predicting Recessions, which uses the level of the effective Federal Funds Rate and the spread between the yields of the 10-Year and 3-Month Constant Maturity U.S. Treasuries to estimate the probability of recession based on historical data.

That method may be greatly understating the probability of a recession starting between September 2019 and September 2020, since that historical data does not take the effects of the Federal Reserve's quantitative tightening policies into account, where the Fed reduces its holdings of U.S. Treasuries and Mortgage-Backed Securities on its balance sheet as a way to achieve the effects of an interest rate hike without actually hiking interest rates - the opposite of what Fed officials set out to achieve during their various quantitative easing programs from 2009 through 2015 after the Federal Funds Rate reached a level near zero percent.

These unusual monetary policies are comparatively recent developments, which Wright's 2006 paper did not contemplate. We've developed an alternate scenario analysis that factors in the effects of the Fed's most recent quantitative tightening policy that continued until 30 July 2019, which would make the effective Federal Funds Rate much higher than the 'official' Wright method indicates, boosting the odds of recession starting in the months from September 2019 through September 2020 as high as 54-55%.

There's no reason though why we should be the only ones to consider that kind of scenario in determining the probability of a future recession! If you would like to consider your own recession probability scenarios, please take advantage of our recession odds reckoning tool, which has become increasingly popular over the last year.

It's really easy. Plug in the most recent data available, or the data that would apply for a future scenario that you would like to consider, and compare the result you get in our tool with what we've shown in the most recent chart showing the 'official' Wright recession odds we've presented above.

On a final note, now that the probability of recession indicated by Wright's method is declining, there is no connection between its level and how long a forecast recession might last should one come to pass - the most it can do is indicate the odds of a recession getting started during the next 12 months. For a history of the analysis we've previously presented throughout the 2017-2020 cycle, here are links to all the analysis we've presented going back to when we restarted this series in June 2017.