After peaking at odds of one in nine back on 9 September 2019, we're now on the downside for the latest elevated recession risk cycle. Through 20 November 2019, the odds of the NBER eventually determining a recession began sometime between 20 November 2019 and 20 November 2020 stand at nearly one in 14, for a 7% probability, according to a recession forecasting method developed back in 2006 by Jonathan Wright, which uses the level of the effective Federal Funds Rate and the spread between the yields of the 10-Year and 3-Month Constant Maturity U.S. Treasuries to estimate the probability of recession based on historical data.

The Recession Probability Track shows where the rolling one-quarter averages of these daily measures stand as of the close of trading on 20 November 2019. 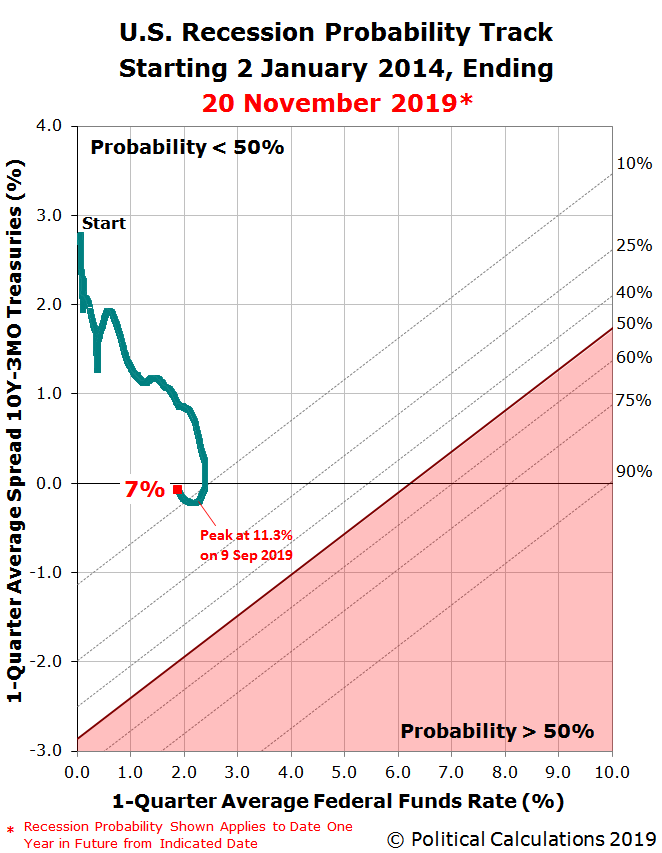 While the recession risk is now falling, that doesn't change where it peaked. According to Wright's model, should the NBER someday declare a recession began sometime in either 2019 or 2020, the odds are highest they will pick a month between September 2019 and September 2020. Since most of that period is still ahead of us, so is the elevated recession risk.

On a positive note, the U.S. Treasury yield curve has normalized since 11 October 2019, with the yield of the constant maturity 10-year Treasury rising above that of the 3-month Treasury. With the yield curve no longer inverted, we are next watching for the spread between the two Treasuries to grow and hold larger than a quarter point difference, after which, we will reduce the frequency for presenting these updates from every three weeks to every six, coinciding with the regular timing of meetings held by the Federal Reserve's Open Market Committee (FOMC).

Given the very low level of the Treasury yield curve spread, we are also watching for signs the recent trend of normalization might reverse. Even though the Fed has effectively restarted its quantitative easing monetary policies of the Great Recession years and has cut the Federal Funds Rate three times since 31 July 2019 while signaling it is done with additional rate cuts for now, should markets come to hold a contrary view, the Fed could be forced to resume rate cuts if the falling trend in recession risk becomes a rising one instead. Such an event would almost certainly coincide with the yield curve inverting once more.