On 25 May 2020, video of the tragic death of George Floyd in police custody in Minneapolis, Minnesota exploded across social media, quickly leading to mass public protests in many cities across the United States. Coming as many states were lifting their initial lockdowns aimed at limiting the spread of COVID-19, many public health officials worried the protests would cause a resurgence of new coronavirus infections.

In the months since, little evidence has emerged to indicate that the anti-police protests contributed to a surge of new SARS-CoV-2 coronavirus infections. A NBER working paper considered data collected in 315 U.S. cities and counties that experienced protests in the five weeks following George Floyd's death, demonstrating "the protests had little effect on the spread of COVID-19 for the entire population of the counties with protests" for all but one:

However, with the exception for Maricopa County, Arizona, we find essentially no evidence that protests contributed to significant or substantial increases in COVID-19 during the period following protest onset, consistent with our main difference-in-differences findings....

We've been following Arizona's experience during the coronavirus pandemic since we identified the state had become a national hotspot for infections in the early summer of 2020. We've continued following Arizona's experience because the state's Department of Health Services makes high quality, detailed time series data available. This data makes it possible to use back calculation techniques to identify the timing of events that changed the rate of incidence for coronavirus exposures, which in turn, changed the trend for COVID-19 infections within the state.

Arizona tracks its confirmed COVID-19 cases by their sample collection dates. Since the onset of COVID-19 symptoms is a significant driver of testing activity, occurring a median of five days after initial exposure with 95% of tests occurring within ten days following this initial viral exposure, we can use the date for positive test results to predict when a turning point will be seen following an event that significantly changed the incidence of viral exposures within a population. These figures apply when sufficient test kits and testing capacity are available to process COVID-19 tests without delays.

In Arizona, 28 May 2020 marked the first day of mass anti-police protests, which were concentrated in Maricopa County and specifically within the city of Phoenix. Adding 10 days to this date suggests that any turning point related to anti-police protests would start after 7 June 2020.

That's exactly what we observe in the following chart, showing the number of confirmed COVID-19 cases in Arizona by their sample collection date. 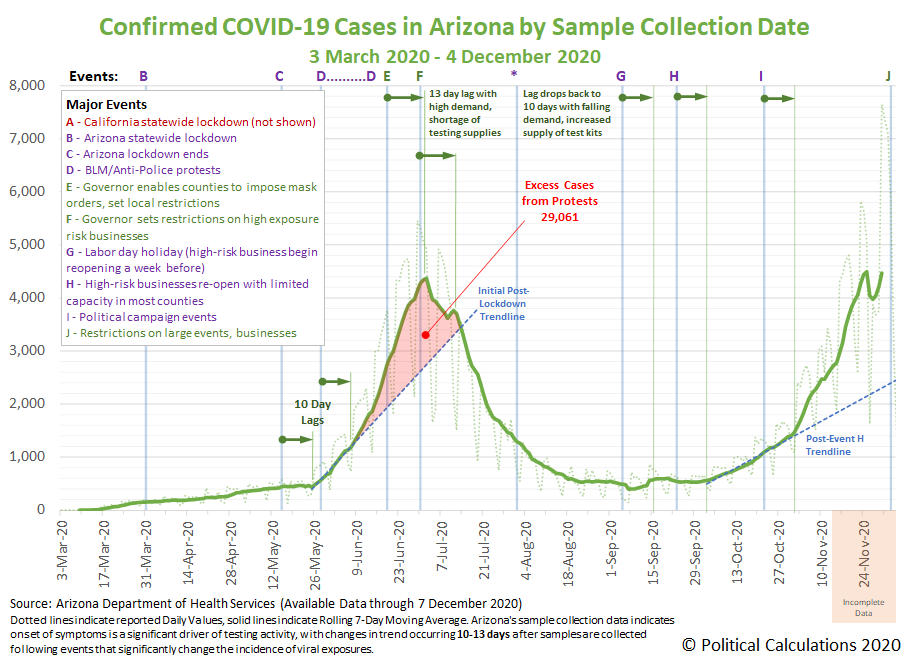 The protests had high participation through 7 June 2020, before the crowds dwindled and finally petered out on 15 June 2020.

That noted, we can use the counterfactual of the trend that existed prior to the protests to estimate the number of excess COVID-19 cases that were recorded after 7 June 2020. We estimate Arizona experienced at least 29,061 more COVID-19 cases as a consequence of the anti-police protests, which is indicated by the shaded red area on the chart.

Arizona's Department of Health Services provides its data for the daily number of new COVID-19 hospital admissions. Here, we note that COVID-19 hospitalizations typically follow some 11 to 13 days following the initial viral exposure, where we would expect to see a surge of new admissions with respect to a counterfactual based on the pre-existing trend on or shortly after 8 June 2020.

Once again, that's what we observe in the data. The next chart shows the number of daily COVID-19 new hospital admissions in Arizona during the nine months from 3 March 2020 through 4 December 2020. 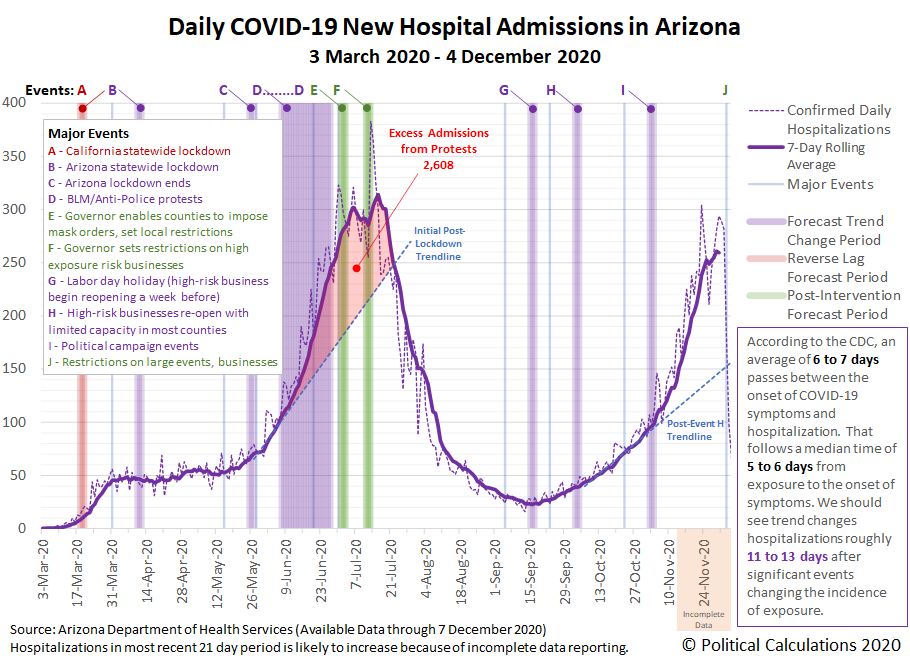 Here, we estimate Arizona experienced at least 2,608 more COVID-19 hospitalizations than it would otherwise have because of the anti-police protests, which is indicated by the shaded red area on the chart.

Excess Deaths Due to Anti-Police Protests

Arizona reports data for the number of actual deaths attributed to COVID-19 per day. Typically, deaths from COVID-19 follow some 17 to 21 days after the date of initial exposure to the SARS-CoV-2 coronavirus. With 28 May 2020 as the starting point, this lag would put the expecting timing of an increase in coronavirus-related deaths in Arizona resulting from the social mixing that occurred as part of the anti-police protests on or shortly after 14 June 2020.

Or would, if not for the demographics associated with the anti-police protests. By and large, individuals below the age of 45 were the main participants in the protests, where fewer than six percent of all deaths attributed to COVID-19 in Arizona have occurred within this age group.

However, that doesn't mean the anti-police protests didn't result in a surge of COVID-19 deaths in the state. We think that after large scale protests in Arizona ended on 7 June 2020, participants carrying coronavirus infections went home, so to speak, where their subsequent social interactions would result in the infection of older Arizonans. Using 7 June 2020 as the starting point for those post-protest interactions, that would put the expected timing of a change in trend for COVID-19 deaths between 25 June 2020 and 28 June 2020.

This scenario fits what we observe in the following chart showing the number of deaths attributed to COVID-19 each day in Arizona from 3 March 2020 through 4 December 2020. 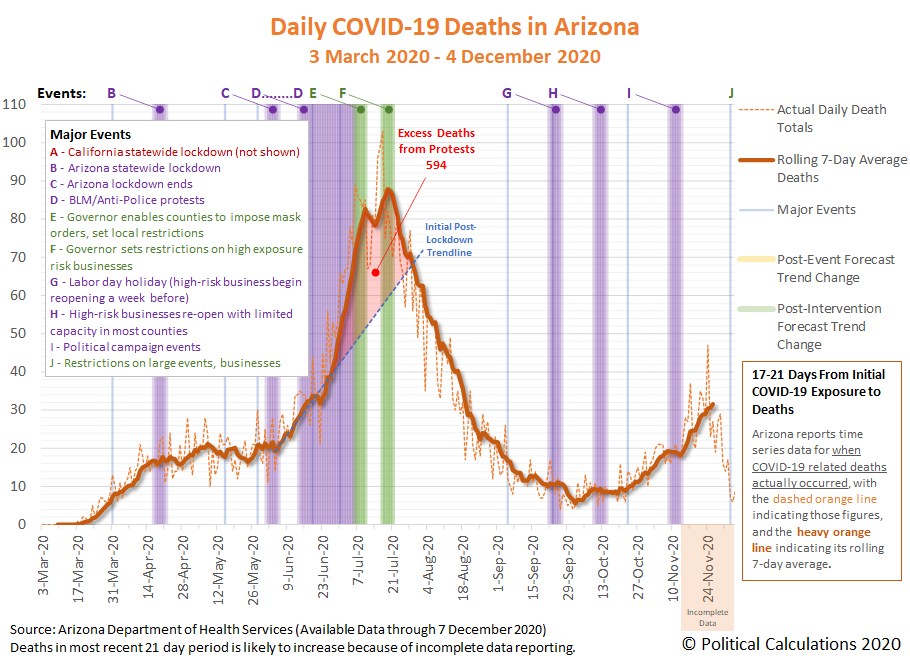 We estimate Arizona experienced at least 594 more coronavirus-related deaths than it would otherwise have due to the anti-police protests, which is indicated by the shaded red area on the chart.

What if the organizers of Arizona's anti-police protests were held accountable for the excess COVID-19 hospitalizations and deaths that occurred as a consequence of their actions?

That's a real question because there were activists in Arizona who recognized the risk of spreading COVID-19 infections, who chose to not engage in mass protests. BLM activist Lola Rainey explains her thinking for why she didn't organize mass street protests in Tucson, Arizona:

"When you talk about taking to the streets an organized movement like that, you have to be aware that you're putting other people's lives at risk. One, because we are in a pandemic, and there are a lot of things you cannot control when people are out in the streets like that,” said Rainey.

Alas, that kind of responsible thinking wasn't anywhere to be found in Phoenix, Arizona, where disputes among protest organizers all but ensured an uncontrolled situation that would promote the spread of coronavirus infections, with participants engaging in behaviors that ran counter to the guidance of public health officials.

In that regard, the various organizers and promoters of the anti-police protests could be held legally liable for the excess COVID-19 hospitalizations and deaths that resulted from their collective actions and negligence, if any enterprising trial attorneys were looking to score some easy personal injury and wrongful death settlements.

Using data from California, the median personal injury settlement is $114,305, so Arizona's protest-related 2,608 excess COVID-19 hospitalizations could represent a $332 million payday for the injured and their lawyers. Meanwhile, with a median wrongful death award of $2.2 million, the corresponding payout for wrongful death claims could total over $1.3 billion. With numbers like that, how long do you suppose it might be before class action lawsuits start being filed by hungry attorneys representing damaged clients?

Why Is the Deadly Intersection of Anti-Police Protests and COVID-19 in Arizona?

The previous section explains "why Phoenix?", but a larger question is "why Arizona?"

We suspect the answer lies in a unique confluence of events. For one, Arizona is unique in its climate. Unlike nearly all other places where mass anti-police protests occurred at this time, the city of Phoenix was already registering daily high temperatures between 100 and 110 degrees Fahrenheit at the end of May 2020 and in early June 2020. Those kinds of temperatures mean that groups of protesters would periodically break away from protesting to cool off in air-conditioned environments. Such environments have been found to be conducive for spreading respiratory viruses like SARS-CoV-2, providing an additional factor for increasing the incidence of infections beyond that from direct participation in the protests.

We think the timing of Arizona's initial lockdown period also played a significant role. Arizona lifted its statewide lockdown on 15 May 2020, which led to a steady but managable growth in the number of infections in the following weeks. At the time of the protests, that increase had provided a critical mass of infected individuals that would fuel a surge of new infections under the conditions of a large, uncontrolled event like mass political protests where social distancing would not be effectively practiced.

Though Arizona's leaders could not have possibly forecast such an event would occur when it did, we can compare the state's experience with that of Nevada, where Las Vegas is the only other major city in the U.S. with a climate similar to Phoenix to test this factor. Here, we find that Nevada delayed lifting its lockdown for nearly two weeks after Arizona, which meant it had a much smaller pool of infected individuals at the start of its protests. Those lower numbers would have greatly reduced its risk of experiencing a surge in cases at the time of the protests, which potentially explains "why Arizona and why not Nevada?", even though both share similar hot, arid climates.

If it wasn't already clear, the role of protest organizers and those supporting or promoting them in contributing to the conditions that promoted the spread of COVID-19 in Arizona cannot be overstated.

There may be additional, lesser factors to consider, but these are the big three that could very well explain most of why the intersection of anti-police protests and COVID-19 proved to be so deadly in Arizona and not elsewhere in the United States.

A Resurgence of Cases

Finally, we should recognize the surge in coronavirus cases that Arizona is currently experiencing. We've previously traced the origin of the current surge to 2020 political campaign events occurring two and a half weeks before the 3 November 2020 election, which stand out because they involved many more people than the anti-police protests did. On 3 December 2020, Arizona Governor Doug Ducey initiated new restrictions on large events and businesses in the state. We should first start seeing any effects from the new restrictions in the state's data for cases and hospital admissions reported after 14 December 2020.

Here's our previous Arizona coronavirus coverage presented in reverse chronological order, with a sampling of some of our other COVID analysis!