The Federal Reserve's Open Market Committee (FOMC) concluded its two-day December 2019 meeting on 11 December 2019, and tried very hard to give the impression that it was done adjusting short term interest rates in the U.S. for now, holding the Federal Funds Rate in its current target range of 1-1/2 to 1-3/4 percent after having reduced it several times earlier in the year.

Combined with a generally rising spread in the U.S. Treasury yield curve, the lowered Federal Funds Rate has reduced the probability that a new economic recession will someday be determined to have started in the United States during the twelve months from December 2019 to December 2019. Through 11 December 2019, those odds now stand at 1 in 18, which rounds down to roughly a 5% probability. 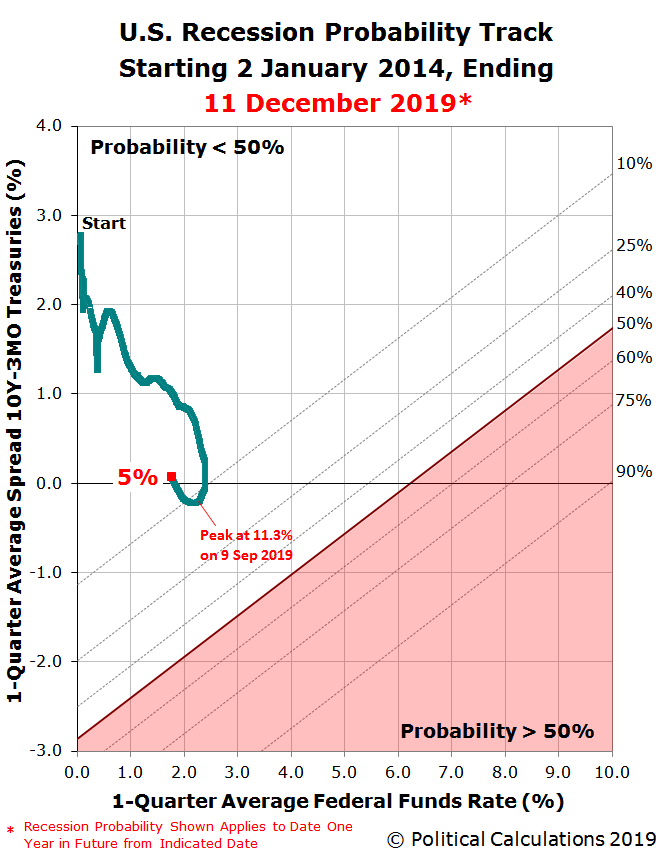 Those odds had previously peaked at one in nine back on 9 September 2019, where if the NBER eventually NBER ever does determine that the national U.S. economy entered into recession at some future time, they will most likely identify a month between September 2019 and September 2020 as its starting date.

With the rolling one-quarter average of the spread between the 10-Year and 3-Month U.S. Treasuries having turned positive, we will be reducing the frequency at which we will provide updates to this series to coincide with the FOMC's meeting schedule, which are held at approximately six week intervals. Should events cause the Treasury yield curve to re-invert however, with the yield on the 10-Year constant maturity U.S. Treasury falling below the yield of the 3-Month constant maturity U.S. Treasury, we will resume more frequent updates.

As we get set to close the books on 2019, there are several hanging risks that could prompt such a change, with the potential expansion of the Fed's current QE-like effort into a full-on quantitative easing program to tame a liquidity crisis that has developed in repurchase "repo" markets over the last several months leading the list.