Since our previous update nearly six weeks ago, the U.S. Treasury yield curve has crashed and the Federal Reserve has implement not just one, but two emergency rate cuts, the latest slashing the Federal Funds Rate to a target range between 0% and 0.25% on Sunday, 15 March 2020.

The two emergency rate cuts have come in the last two weeks, as the impact of the COVID-19 coronavirus pandemic has begun to affect the U.S. economy and its prospects.

We're making a note of that recent timing because the recession probability track is based on 90-day rolling averages for both the spread between 10-Year and 3-Month constant maturity U.S. Treasuries and the Federal Funds Rate, which might as well have the turning radius of a large container ship. Never the less, it is showing signs of reversing its recent trend of improvement, where it now indicates a 4% chance, or a 1-in-26 probability, the National Bureau of Economic Research will someday find a national recession began in the United States between March 2020 and March 2021. 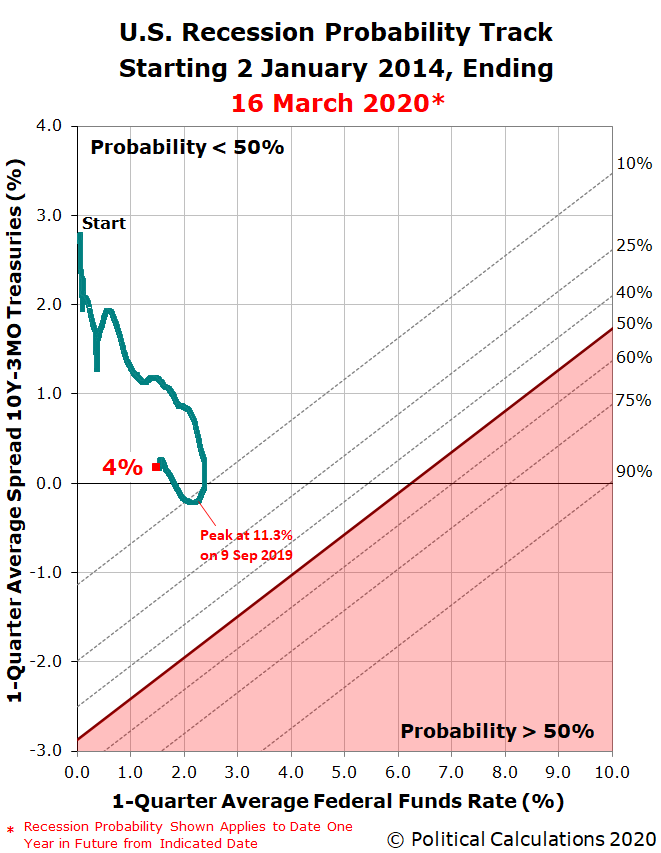 Given current events, we'll likely return to presenting updates in this series roughly every three weeks, roughly coinciding with every other regularly scheduled Federal Open Market Committee meeting at the Federal Reserve. But you don't have to wait for us if you want to get an update on the latest recession odds sooner! Our recession odds reckoning tool is both free and really easy to use. Plug in the most recent data available, or the data that would apply for a future scenario that you would like to consider, and compare the result you get in our tool with what we've shown in the most recent chart we've presented above to get a sense of how the recession odds are changing.

Meanwhile, if you know anyone from the Fed who might be looking for ideas of what else they might do to forestall worse economic problems, send them here and tell them to scroll to the first update....