Two years after it first went into effect, the negative fallout from Philadelphia's controversial soda tax continues to pile up. Here's a short summary of the news that has broken since we last reviewed what has perhaps become the most unpopular tax in the City of Brotherly Love. 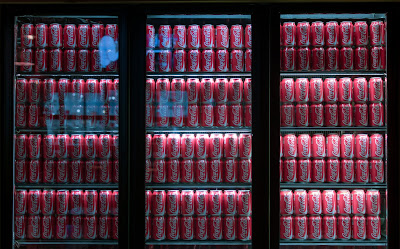 A Philadelphia ShopRite convenience store will close, with the owner citing lost business related to the city's soda tax as the primary reason for its closure. The store is located near Philadelphia's city limits, where local residents appear to have taken a good portion of their business across the border to avoid paying the tax. Jeff Brown, the store's owner, whose efforts in bringing supermarkets into impoverished areas of Philadelphia was lauded by President Obama in his 2010 State of the Union address, indicated that reduced sales at all his stores since the soda tax went into effect has cumulatively reduced his total payroll by about 200 jobs, which he has achieved through attrition rather than through layoffs. The store closure is expected to add another 100 jobs to that running total of attrition.

A second independent study has confirmed that net soda consumption among Philadelphia's total population has not meaningfully declined, where "the tax did not improve nutritional intake by encouraging consumers to substitute to healthier beverages". The study's authors, Stephan Seiler, Anna Tuchman, and Song Yao, also found that nearly 100% of the tax is being passed through to Philadelphia consumers, confirmed that many of these shoppers are avoiding the tax by shifting their grocery shopping to stores outside of the city's limits, and that the tax is achieving a disproportionately negative impact by imposing "a relatively larger financial burden on low income/high obesity households that are less likely to engage in cross-shopping at stores outside of the city."

A 116-count federal indictment against International Brotherhood of Electrical Workers president John J. Dougherty (aka "Johnny Doc") and Philadelphia city councilman Robert "Bobby" Henon, among others. In a city like Philadelphia where political corruption scandals are common, that news itself might not stand out, except in this case, because it says quite a lot about the true motivation behind Philadelphia's soda tax.

According to a federal indictment unsealed Wednesday, corrupt Democratic city officials and electricians’ union leaders pushed through the soda tax in 2016 in a revenge feud against the Teamsters union, instead of a motivation to affect public health.

The Justice Department’s indictment reveals how Philadelphia Councilman Robert Henon, who was on the payroll of Mr. Dougherty’s union, introduced the soda-tax proposal as payback against the Teamsters for criticizing Mr. Dougherty in a political advertisement a year earlier.

The Teamsters opposed the soda tax because they believed it would cost them jobs by reducing demand for soft drinks.

When aides to Democratic Mayor Jim Kenney tried to explain to Mr. Dougherty the public health benefits of the soda tax, the indictment alleges, the union leader replied, “You don’t have to explain to me. I don’t give a f–.” He predicted it would “cost the Teamsters 100 jobs in Philly.”

A very predictable negative outcome that Philadelphia Mayor Jim Kenney neither disputed at the time nor sought to diminish in the time since, all while Kenney's claims that positive public health benefits would be achieved from imposing the city's soda tax are proving to be unfounded in practice.

Dougherty's support for the controversial tax was essential because of the IBEW Local 98's money and political influence within the city, where the union's backing often made the difference between candidates winning elections or not. In addition, Johnny Doc's influence extends to appointed positions, including gifts to judges, who might then be counted upon to back the union-supported positions such as on the soda tax when its legality was challenged in court. The full magnitude of the unfurling political scandal as it relates to how the Philadelphia's soda tax was passed and survived legal challenge is not yet known.

Finally, with eleven months of Philadelphia Beverage Tax revenue now counted for 2018 (taxes assessed in December 2018 and collected in January 2019 will be reported either later this month or early in March 2019), we anticipate that the full year's tax collections will fall short of its second year target. 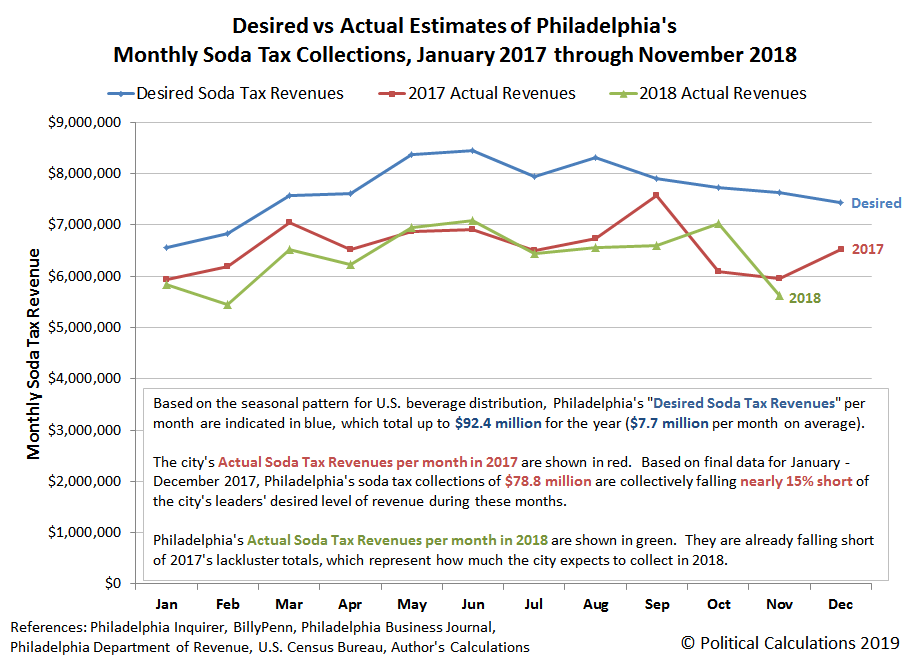 From January through November 2018, Philadelphia's Beverage Tax has accumulated $70,348,376 in the city's coffers, which is nearly $8.5 million short of the city's $78.8 million target. The most the city has ever collected from its soda tax in a single month was $7,567,159 in September 2017, so if it were to collect that much once again, it still would fall about one million dollars short.

Meanwhile, Philadelphia's original revenue target for its controversial tax on the distribution of sweetened beverages for retail sale in the city was $92.4 million, where actual revenues of $77.8 million would be 84% of that figure. In 2017, Wharton Business School Professor of Finance and Public Policy Robert Inman indicated the Philadelphia Beverage Tax could be considered a success if it collected 85% to 90% of the city's original revenue target.

It will almost certainly miss clearing that low bar needed to be considered successful in 2018. The only question now is by how much will it fall short?