On 28 November 2018, 20 black clergy in Philadelphia announced their opposition to the continuation of the controversial tax, breaking what had been their support for Philadelphia Mayor Jim Kenney's tax program, noting its disproportionately racial impact.

Nearly two years after the city’s sugary beverage tax went into effect, 20 members of Philadelphia’s Black clergy are calling for its repeal over concerns that the revenue-generator is regressive and disproportionately taxing African Americans and the poor.

“I don’t see how the tax, as it is constructed, can really effectively do what it is intending to do. We think it needs to be repealed and reconceptualized,” said the Rev. Jay Broadnax, president of the Black Clergy of Philadelphia and Vicinity....

The Philadelphia pastor said the 1.5-cent-an-ounce levy on sugary beverages, including diet soda, was having unintended consequences by saddling people of color, the poor and senior citizens with higher grocery bills, while dips in soda sales were hurting small neighborhood business owners.

“The way that it has worked out is that it seems to be hurting more than it’s helping,” Broadnax said.

Indeed it has, which has been evident for quite some time. Last December, economic analysis firm Oxford Economics (OE) quantified their assessment of the economic impact from the unpopular tax, finding:

Overall, our models indicate an employment decline of 1,192 workers in Philadelphia as a result of the PBT, or roughly 0.14 percent of Philadelphia employment. These job losses broke out to roughly 5 percent from bottling, 25 percent from beverage trade and transport margins, and 70 percent from reduced non-beverage grocery retail. Operational data provided by bottlers suggests that this modeling actually understates true job losses, by roughly 72 jobs. The modeled job losses correspond to $80 million in lost GDP, and $54 million less labor income. This reduced economic activity results in consequent tax losses, which our modeling can estimate. Overall, we find a $4.5 million reduction in local tax revenue.

Since the Oxford Economics report was commissioned by the American Beverage Association, its findings have been challenged on just that basis by political supporters of the soda tax who decry the influence of "Big Soda". We have no affiliation with the ABA, its members, or soda tax supporters, where we can offer an objective and independent assessment of its economic impact based on up-to-date information.

The following tool updates a previous analysis we provided in June 2017 to reflect the findings of other independent economic research, specifically the following key points:

In our tool, we'll limit the price increase to just the 1.5 cents-per-ounce that was directly imposed upon beverages distributed in the city for retail sale by the Phildadelphia Beverage Tax. We will also incorporate quantity data for the full 2017 calendar year, where we've estimated from other data provided by the City if Philadelphia that 8,438 million ounces of sweetened beverages would have been distributed for sale in the city without the tax, and that 5,256 million ounces were actually distributed in the city during the tax' first year in effect.

With those changes noted, here's the updated tool. If you're accessing this article on a site that republishes our RSS news feed, please click here to access a working version of the tool. If you would rather not, here is a screen shot of the results we obtained using the default data.

With the default data, our tool estimates the deadweight loss to Philadelphia's economy to be $23.8 million. This figure is a little under a third of the total $80 million economic loss projected by Oxford Economics in their methodology from data for first four months of the Philadelphia Beverage Tax being in effect.

Moving the clock forward to 2018, we can confirm that Philadelphia's beverage tax collections are continuing to fall short of city lowered expectations, where we find that through October 2018, the city is cumulatively running about $3 million behind where they were at the same point of time in 2017. 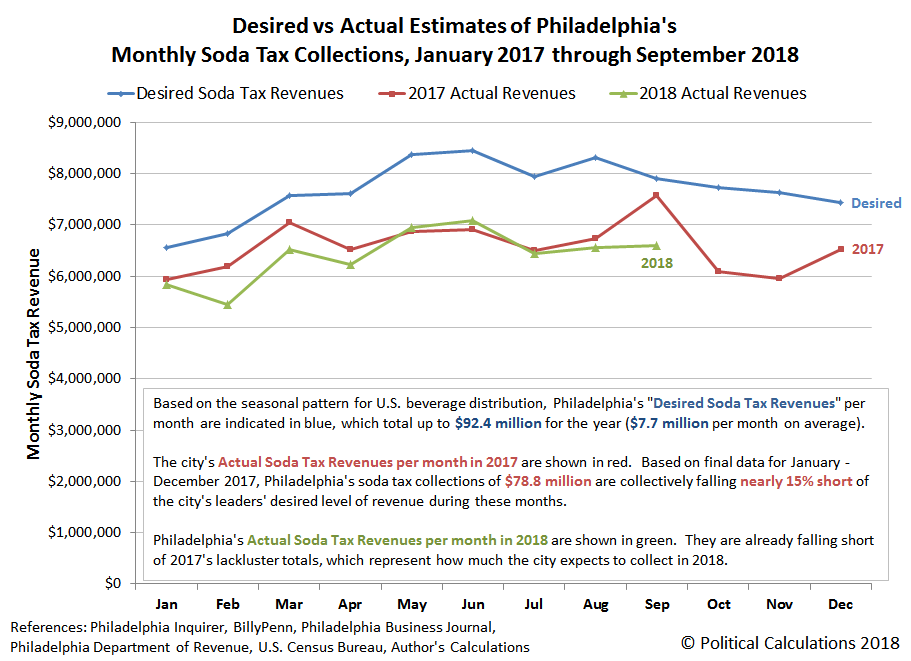 Philadelphia's civic leaders therefore have less money to spend than what they were expecting, but as it happens, they're not spending much of the soda tax money that they are collecting.

How much the soda tax has raised

From the time tax it went into effect in January 2017 to the end of the most recent fiscal quarter: $137 million.

...And how much has been spent

Philadelphia's new controller, Rebecca Rhynhart, is taking issue with how Philadelphia's political leaders are managing the money from its soda tax:

City Controller Rebecca Rhynhart released a searchable data set on Tuesday that provides access to all revenue and expenditures for the tax since it was enacted in January 2017....

Rhynhart had criticized the Kenney administration for keeping the revenue in the city's general fund rather than creating a segregated reserve account.

"The use of a segregated reserve account would ensure that revenue is spent only on earmarked programs and would promote transparency by making it easier to track revenue to expenses," Rhynhart's office said in a statement accompanying the data release.

Rhynhart is greatly concerned that Philadelphia's civic leaders might consider treating the money collected from the tax, which is supposed to be dedicated to funding pre-K programs, community schools, and improvements to public facilities, like a slush fund within the city's accounts. With about three-quarters of the all the soda tax money sitting in the general fund unspent, it's virtually an open invitation for it to be misappropriated.

Meanwhile, the city's old controller, Alan Butkovitz, who has recognized many of the problems that have arisen from the Philadelphia Beverage Tax, is now running for mayor, where his opposition to current Mayor Jim Kenney's pet tax project is a centerpiece of his campaign.

There's a lot that is wrong with Philadelphia's soda tax, but the bottom line is that is isn't working.