Welcome to a new series of Inventions in Everything! The IIE team is rested and ready to plunge once again into the amazing world of human ingenuity, featuring some of the most unbelievable inventions that have ever been devised.

Unbelievable may be an understatement for today's featured invention, for which U.S. Patent No. 3,216,423 was issued to inventors George and Charlotte Blonsky on 9 November 1965.

That date is key for understanding the environment in which the inventions was made, coming as America was in the heat of the space race on its way to the first Moon landings. Inventors across America were turning their attention to the technology of space and what it promised for creating a better life. For the Blonskys, that meant introducing the world to their concept of a better way to bring a new life into the world, which required they patent their "apparatus for facilitating the birth of a child by centrifugal force".

We're not making this up! In the 1960s, NASA's astronauts were using large centrifuges in their training to prepare for the forces they would encounter in space travel, much like the two physicists who got to ride in a modern centrifuge did in this 2-1/2 minute video from 2014:

The Blonskys believed those kinds of forces could be applied toward assisting women as they give birth, which would provide several benefits for that process, which they describe in their patent's introduction:

The present invention relates to apparatus which utilizes centrifugal force to facilitate the birth of a child at less stress to the mother.

It is known, that due to natural anatomical conditions, the fetus needs the application of considerably propelling force to enable it to push aside the constricting vaginal walls, to overcome the friction of the uteral and vaginal surfaces and to counteract the atmospheric pressure opposing the emergence of the child. In the case of a woman who has a fully developed muscular system and has had ample physical exertion all through the pregnancy, as is common with all more primitive peoples, nature provides all the necessary equipment and power to have a normal and quick delivery. This is not the case, however, with more civilized women who often do not have the opportunity to develop the muscles needed in confinement.

It is the primary purpose of the present invention to provide an apparatus which will assist the under-equipped woman by creating a gentle, evenly distributed, properly directed, precision-controlled force, that acts in unison with and supplements her own efforts.

In accordance with the invention, there is provided rotatable apparatus capable of subjecting the mother and the fetus to a centrifugal force directed to assist and supplement the efforts of the mother so that such centrifugal force and her efforts act in concert to overcome the action of resisting forces and facilitate delivery of the child.

Did we mention we may have stumbled across one of the most insufficiently informed and misogynistic patents ever filed?

The Blonskys' concept for a birthing centrifuge more resembles a modified playground merry-go-round, with the mother-to-be's head positioned at the center of rotation and her body positioned radially outward, as illustrated in Figure 1 of their patent: 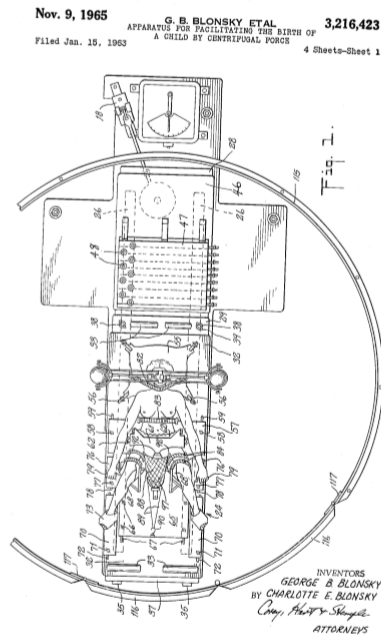 George and Charlotte Blonsky go on to describe how they expected a g-force assisted birth would take place:

During the operation, the operator gradually speeds up the machine to the predetermined force which is expected to produce the birth of the child, and if such force does not accomplish this, he does not exceed it, unless the physician decides to go the higher g's. He cannot, however, go beyond the maximum g's for which the machine has been set without causing the governor (105) to shut down the machine. When in the operation of the machine, the operator reaches a rate of rotation at which the combination of pressures produced both by the created centrifugal force and by the mother exceed the childbirth resisting forces (friction and constriction), the movement of the fetus occurs and the child is delivered into the net (88). While in the net, the child is still subjected to the action of centrifugal force and is caused by such force to firmly press against the elastic bottom of the net (88). As the elastic cables (89) and the net give somewhat to this force which is equal to the weight of the child multiplied by the number of g's it is subjected to, the cotton wad (97) in the net is pressed by the child against the switch lever (93) which is actuated to cut the power from the motor (15) and may be utilized to activate an electric bell, announcing the event. The operator then applies the handbrake (18) to gently bring the machine to a complete stop.

At this point, the Inventions in Everything team would like to point out that spinning at 31.2 revolutions per minute (rpm) would be enough to generate 1 g of centrifugal force. That's quite fast when we're talking about the rotational speed of such a large diameter merry-go-round type contraption, and potentially a safety hazard to the physician and technicians operating the childbirth-assisting centrifuge. Fortunately, the Blonskys took care to address that risk to the birthing team in their patent:

For safety sake, the machine is enclosed in an annular fence (115) capable of excluding all personnel from the reach of the revolving deck (28).

Because the one thing a mother who is most concerned about delivering a healthy baby into a net wants in case there are any complications while she is strapped to a rotating platform is for the physician to be safely on the opposite side of a fence until the birthing centrifuge ride they are on comes to a complete stop. Then again, having all the blood race away from her head during the most critical portion of the procedure would reduce her ability to remain conscious without the need for any anesthesia, so perhaps such concerns wouldn't be on her mind at that point.

Once again, we're not making any of this up! To the best of our knowledge, the Blonskys' apparatus for facilitating the birth of a child by centrifugal force has never been built, nor are we aware of any childbirth that involved spinning the mother on a rotating platform to assist the birth of a baby. But maybe we missed that episode of House, M.D.

Inventions in Everything: The Archives

Ready to sample more of the most creative designs and patents the Inventions in Everything team has explored? Our archives celebrate inventions ranging from the whimsical to the inspired in reverse chronological order!