Well over two years after Philadelphia's controversial tax on sweetened beverages distributed for retail sale within the city's limits first went into effect in January 2017, the Philadelphia Inquirer has conducted what it describes as the "first independent polling done about the tax". Here's a short summary of the results of its survey of registered voters in Philadelphia:

It's not surprising that roughly five out of eight Philadelphians view the city's soda tax as a failure. The Philadelphia Beverage Tax has chronically fallen short of the desired level of revenue that city officials were counting upon to fund pre-Kindergarten and community school programs and also to fund repairs and improvements to city-owned parks, recreation centers, and libraries. The following chart shows how far short the city's annual tax collections from its soda tax have fallen below its original revenue projections. 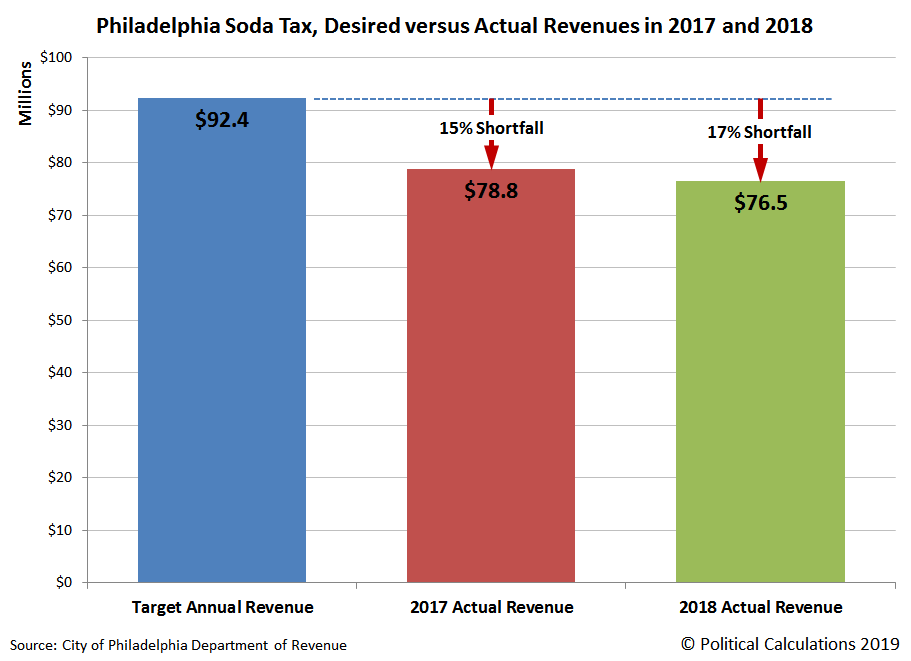 In 2017, Wharton Business School Professor of Finance and Public Policy Robert Inman declared the Philadelphia Beverage Tax could be considered a success if it collected as little as 85% to 90% of the city's original annual revenue target of $92.4 million. It has clearly failed to pass that very low threshold for success during the first two years it has been in effect.

Beyond its fiscal failure, tax opponents have argued that the soda tax creates some really perverse incentives for city residents who support these programs, who must either choose to purchase and consume beverages perceived to be unhealthy or accept the programs they want will be starved of funds. We believe the twisted and hypocritical logic that tax supporters have used to justify the soda tax contributes to the widespread public perception of the tax's failure.

The Inquirer poll reveals that Philadelphians really do want the things that the city's 1.5 cent-per-ounce tax on naturally and artificially-sweetened beverages were meant to fund, with many indicating a willingness to dedicate other tax revenues to pay for them. The city's mayor, Jim Kenney, and several city council officials oppose the repeal of the Philadelphia Beverage Tax.

The tax will be an issue in the upcoming primary election for city mayor and city council positions in the heavily Democratic party-controlled city on 21 May 2019.

We've been covering the story of Philadelphia's flawed soda tax on roughly a monthly basis from almost the very beginning, where our coverage began as something of a natural extension from one of the stories we featured as part of our Examples of Junk Science Series. The linked list below will take you through all our in-near-real-time analysis of the impact of the tax, which at this writing, has still to reach its end. For a general history of Philadelphia's soda tax, check out the Philadelphia Inquirer's timeline.

There are still aspects of the story we plan to develop, including the impact of the tax on city retailers and beverage distributors, several of whom have opened their books to the media during the past two years. We'll also get back to where our coverage started to review what two years of scientific study has determined about the effectiveness of soda taxes in reducing obesity rates, which are the main benefit claimed by soda tax supporters for imposing this particular kind of "sin" tax.