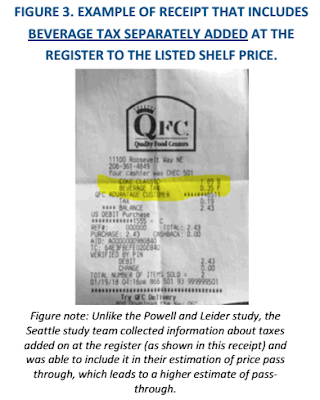 The idea behind sin taxes is pretty simple. By imposing a tax on a product or activity that is perceived to be undesirable, it becomes less affordable than it was before, with its higher cost reducing the quantity demanded. The government benefits from having higher tax collections and society benefits from having less of the undesirable thing being taxed.

But what if a government carefully crafted a sin tax to achieve perceived benefits that could have been easily achieved without the tax?

That describes the results of the city of Seattle's soda tax. Here, Seattle's city government set up its soda tax with the intent to reduce the consumption of calorie-laden sugary beverages, which they anticipated would produce health benefits by reducing rates of obesity among the city's residents. When they passed the tax in December 2017, they also funded a study by the University of Washington to measure its impact on the city's lower-income residents, expecting the tax would reduce their consumption of the taxed beverages as it went into effect in January 2018.

That study would seek to answer two main questions:

The results of that study through the first year of Seattle's soda tax were published in April 2020. Here's an excerpt describing the answer it found for the first question (boldface emphasis ours):

Our findings suggest that the tax resulted in an increase in the average price of all measured taxed beverage types in Seattle, above and beyond price changes in the comparison area, except for sweetened syrups added to coffee drinks. After accounting for changes in the comparison area (the difference-in-differences) and controlling for price variations by store characteristics (store "fixed effects"), beverage type, and/or beverage size, the overall average price increase was 1.55 per ounce, which presents 89% of the tax....

The tax may be affecting beverage prices in stores near the Seattle border differently than in other stores. Some other cities with beverage taxes (Berkeley and Philadelphia) report that pass-through tends to be lower in stores closer to the city border, presumably due to nearby competition. To explore whether this was the case in Seattle, we examined prices of beverages in 35 stores that were within 1 mile of the southern and northern border of the city, and compared the price changes in these stores to the price changes in the comparison area stores. We found that, indeed, on average, pass-through was lower in the stores close to the border (64% tax price pass-through) than the citywide average.

The following chart illustrates the amount and share of Seattle's soda tax that was passed through to Seattle's consumers: 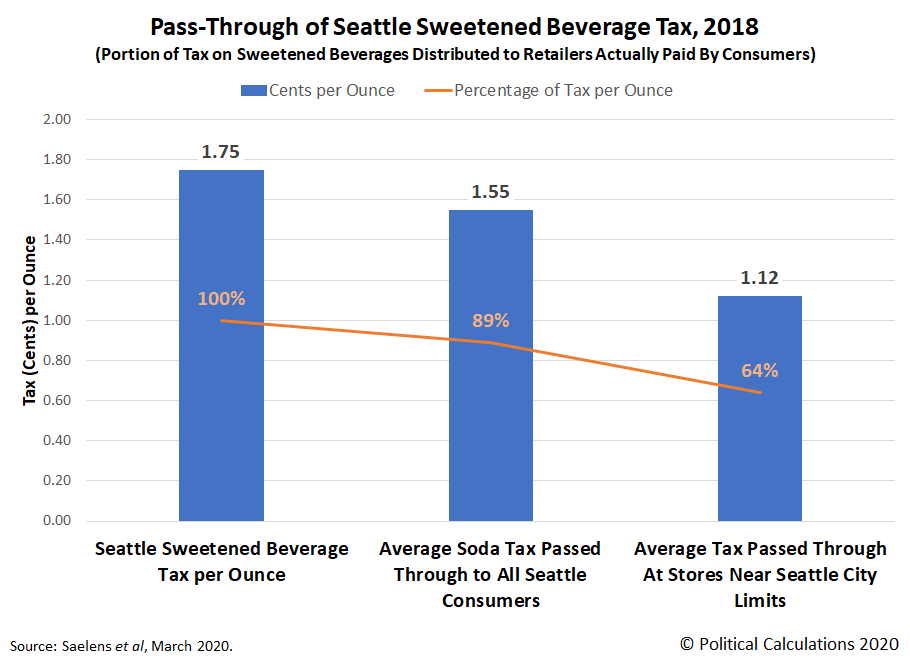 At this point, if you believe the logic of sin taxes, you might reasonably think that sales of sugary soft drinks within Seattle's city limits would plunge, while sales of identical but untaxed drinks in stores outside of Seattle would not be negatively affected.

But that's not what the University of Washington's researchers found when they compared the relative consumption of lower-income Seattle residents with the residents of a comparison area in adjacent communities sharing similar demographics (boldface emphasis ours):

We observed decreases in the consumption of beverages subject to Seattle's Sweetened Beverage Tax among lower-income children and parents living in Seattle from before the tax went into effect to 12 months later. These reductions among Seattle families were similar, however, to reductions seen among lower-income comparison area families over this one-year period. The percentage of children and parents who consume large amounts of sweetened beverages decreased in both Seattle and the comparison area, and in similar amounts. Lower-income children and parents also decreased non-taxed beverage consumption whether residing in Seattle or the comparison area. Thus, the observed reductions in this sample of lower income Seattle resident's reported sugary beverage consumption from the pre-tax period to 12 months post-tax may not be attributable to Seattle's sugary beverage tax.

The following chart summarizes the change in sugary drink consumption observed by lower-income children and their parents in both Seattle, where the soda tax was implemented, and similar residents in the communities that made up the University of Washington researcher's comparison area: 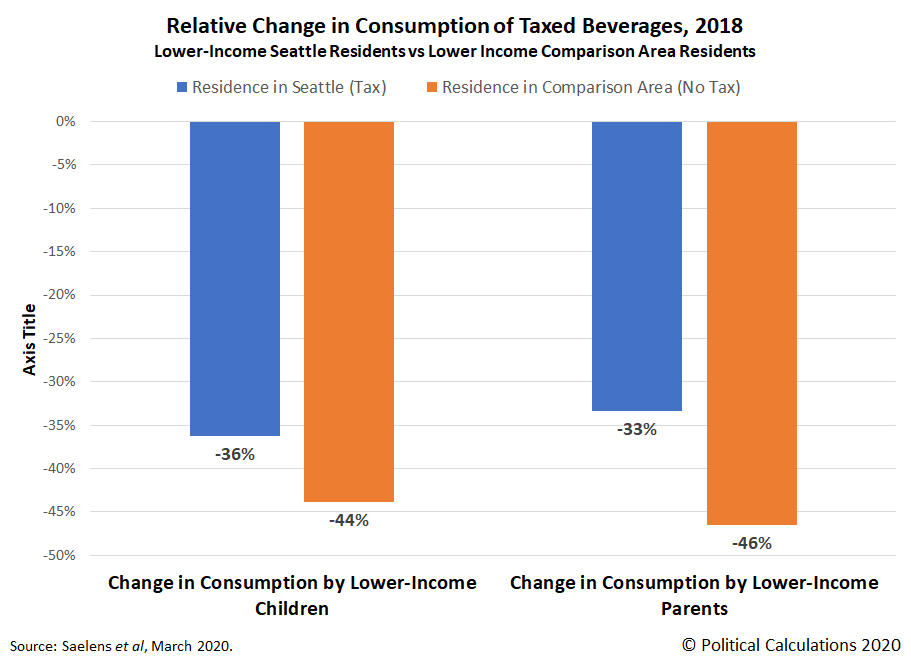 This latter finding wrecks the hypothesis that the decline in consumption of sugary soft drinks in Seattle was due to the imposition of its sweetened beverage tax, a finding with which other analysts who have reviewed the UW study concur:

The inescapable conclusion from the data is that while there was a decrease in consumption of sugared beverages by the low-income Seattle children and parents in the study, none of it can be attributed to the sweetened beverage tax. In almost every single measurement, the comparison group not subject to the SBT saw bigger decreases in consumption.

This outcome means other factors play a more important role in affecting consumer choices where beverage consumption is concerned. As a sin tax meant to influence consumer behavior, Seattle's sweetened beverage tax has clearly failed. In practice, it is just another excise tax that the city's government has imposed to raise revenue to fund the political priorities of elected officials.

We had higher hopes for Seattle's soda tax. Unlike the city of Philadelphia, which imposed its soda tax to fund its mayor's political priorities in a money grab aimed at lower-income residents without any pretense of realizing any health benefits, Seattle's soda tax was intended to influence consumer behavior in a way that proponents could realistically expect to achieve a desirable outcome in the health of Seattle residents, making it an ideal example of what a sin tax might achieve.

Instead, Seattle's soda tax has fallen flat. Based on these findings, like Philadelphia's soda tax, it is simply a regressive tax that does little other than extract revenue from primarily lower-income residents with little-to-no offsetting positive health benefits.

While we haven't previously covered Seattle's experience with its soda tax, we have covered Philadelphia's controversial tax in depth. The following posts will take you through much of our analysis of that city's experience.